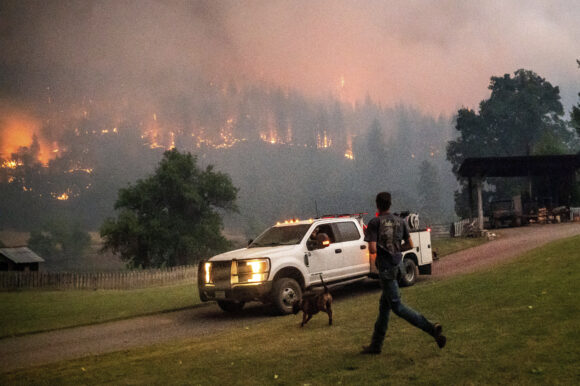 California’s largest wildfire so far this year has so far charred nearly 90 square miles, getting only a little help from rainfall in the area this week.

The wildfire, which is now listed as 10% contained, broke out on July 29 in an unpopulated area in Klamath National Forest.

“Tuesday’s thunderstorms dropped 1-3 inches of rain on the eastern flank of the McKinney Fire. The higher amounts fell on the eastern one third,” a recent CalFire situation summary states. “Heavy debris flow occurred as a result in multiple drainages and blocked lower lying portions of Humbug Creek Rd. On Wednesday morning, heavy equipment was used to reestablish access into the area for the firefighters working that branch of the fire. Although a considerable amount of rain fell, many pockets of heat remain. As the area dries in the coming days, fire activity in the east is expected to pick up once again. The western half of the fire did not receive measurable precipitation.”

CalFire has confirmed damage to property. The Associated Press reported more than 100 buildings have been burned. Injuries have been reported, and there are reports of four fatalities.

Two bodies were reported found inside a burned vehicle earlier this week. The discovery of the latest two brought the death toll to four in the state’s largest wildfire so far this year.

The cause of the blaze is under investigation.