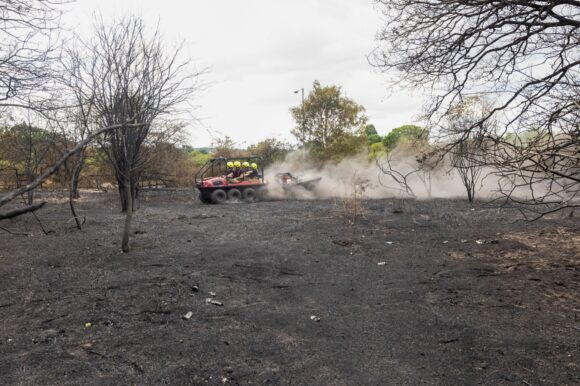 England had the driest July since 1935 amid a searing heat wave that pushed infrastructure to the brink and severely disrupted travel.

The unusually dry weather came as temperatures rose above 40 degrees Celsius (104 Fahrenheit) for the first time. The intense heat had sparked fires near London, triggered warnings that railway lines could buckle, canceled flights and forced power stations to operate at low levels to prevent overheating.

The dry and hot summer that’s spreading across all of Europe is also a stark reminder of the unfolding climate crisis. Heat waves are becoming more frequent and intense, and temperatures this extreme are set to become more common.

A high-pressure weather system dominated the UK last month, pushing most of the rain toward the northwest of the country, according to the Met Office. Rainfall was also more uneven than usual, with England registering just 35% of its average rainfall for July, according to the statement.

Photograph: Firefighters on a buggy pass through Dartford Heath, following a major fire during a heat wave, near Dartford, UK, on Wednesday, July 20, 2022.

Insurance admin - September 26, 2022 0
Florida’s governor has declared a state of emergency for the entire state, days before a...

A Week After Fiona, Just Over Half of Puerto Rico Has...