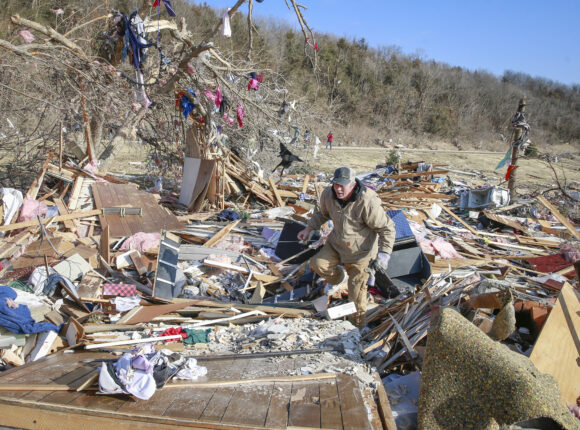 Preliminary economic losses from natural hazards billion during the first quarter of 2022 totaled $32, of which less than 50% (or $14 billion), was covered by public and private insurers, according to a report published by Aon.

Although the first quarter of the year is typically the quietest, the report said, Q1 2022 marked the sixth consecutive year to record more than US$10 billion in insured losses, said the report titled Global Catastrophe Recap – Q1 2022.

Some of the most significant natural hazard activity during the quarter occurred in: Western and Central Europe windstorms (Dudley/Ylenia, Eunice/Zeynep and Franklin/Antonia), Australia’s east coast floods, the Japan earthquake on March 16, and the severe convective storms (SCS) seen in the United States in March.

The Asia Pacific (APAC) region accounted for the highest percentage of Q1 economic losses at $15-plus billion, followed by the Europe Middle East and Africa (EMEA) at $8 billion and the United States at $6 billion. (Economic losses, or the overall costs of natural catastrophes to economies, include the insurance price tag).

Aon explained that these totals will likely be revised upward, perhaps considerably, in the coming weeks and months, as this type of loss development is standard and expected in the aftermath of larger scale events.

For public and private insurers, the $36 billion in Q1 weather-related insured losses in 2021 and 2022 represented the second-highest two-year total on record – second only to 2020 and 2021, which tallied $40 billion and was primarily driven by the $25 billion of losses seen in Q1 2021, said Aon.

The two-year record for all natural hazards (including earthquakes, tsunamis, etc) remains 2010 and 2011 at $98 billion.

Diving into some of the quarter’s costliest events, Aon said Storm Eunice/Zeynep, which hit during the period Feb. 18-19 was the costliest windstorm to hit the European Union since 2010, with insurance claims of approximately €4.0 billion ($4.3 billion). (The UK Met-Office and the Irish National Meteorological Service Met Éireann named the storm Eunice, while the Free University of Berlin named the storm Zeynep). Seventeen lives were lost during Windstorm Eunice.

Eunice/Zeynep was one windstorm in a series during the period Feb. 16-21 that also included: Dudley/Ylenia and and Franklin/Antonia.

The magnitude-7.3 earthquake that shook Japan on March 16 is likely to cost insurers more than $2 billion, with economic losses well into the billions of U.S. dollars, said Aon, recalling that the event occurred just days after the 11th anniversary of the Great Tohoku Earthquake on March 11, 2011.

Four people lost their lives, and 244 others were injured.

“The combined cost of Q1 U.S. SCS activity was expected to result in a multi-billion-dollar loss for the insurance industry. The country is well on its way to recording its 15th consecutive year with insured SCS losses topping $10 billion,” the report continued.

There were at least 290 tornado Local Storm Reports (LSRs), of which 222 have thus far been unofficially confirmed via National Weather Service (NWS) surveys, said Aon, quoting data from the Storm Prediction Center (SPC). “This was well above the Doppler radar era (1990-2020) average of 83 and marked the first time that the month of March surpassed the 200-tornado threshold.”

In total, there were at least 354 tornado LSRs in Q1 (and 265 unofficially confirmed), with 12 tornado-related deaths, Aon continued.

The strongest tornado of the year to-date was a long-tracked EF4 tornado with up to 170 mph (275 kph) winds in Iowa on March 5, which was one of at least 14 confirmed tornadoes in the state on that day. The twister resulted in extensive damage in Madison County near the town of Winterset along its 70-mile (112 km) path. Aon said this represented the second-longest tornado path observed in Iowa since 1980.

An historic period of torrential rainfall affected broad swaths of Australia’s East Coast during the latter half of February through March, with parts of New South Wales and Queensland being among the hardest hit, according to Aon. Substantial flooding was seen in the greater Brisbane and Sydney metropolitan areas in addition to other localized communities in each state.

As of April 8, the Insurance Council of Australia (ICA) said that at least 173,346 claims had been filed with an estimated value of A$2.43 billion (US$1.81 billion). These totals will continue to increase and agriculture will see additional insured losses, added Aon.

Australia’s Bureau of Meteorology said several areas set numerous one-day (24-hour), monthly, and quarterly rainfall records, said the report, noting that many of these records were set in locations with more than 100 years of observational data.

The overall economic toll – including uninsured or underinsured damage – will be well into the billions of U.S. dollars, resulting in one of Australia’s costliest flood-related events, the report said.

“The first quarter is typically the quietest of the year, though 2022 marked the sixth consecutive year to record more than $10 billion in insured losses,” commented Steve Bowen, managing director and head of Catastrophe Insight for Aon’s Impact Forecasting team.

In terms of climatic trends, the Aon report said that January 2022 was the sixth-warmest January on record, while February was the seventh warmest, and March was the fifth warmest. Aon quoted the National Oceanic and Atmospheric Administration (NOAA), which compared global records dating back to 1880.

“In our Q1 study, we highlighted the final, released findings of the IPCC’s recent Sixth Assessment Report, which stated that projected climate-related losses are likely to escalate with every additional increment of global warming,” Bowen added. (The IPCC is The United Nations Intergovernmental Panel on Climate Change.)

“This will further compound overall risk levels on a global scale. Adaptation, planning and strategic implementation need to be three fundamental aspects to climate change preparedness, as they can lead to significant societal and ecological protection as communities navigate this increasing volatility.”

The growing impact of “secondary perils,” such as winter weather, flooding, and severe convective storm, have accounted for a significant portion of the overall quarterly economic cost, explained Aon. “This reinforces the question as to whether the term ‘secondary peril’ has become obsolete because the losses associated with these perils are impacting more populated communities with increasing intensity and resulting in higher loss costs.”

Photograph: Cleanup efforts are underway in Winterset, Iowa, on Sunday, March 6, 2022, after a tornado tore through an area southwest of town on Saturday. Photo credit: Bryon Houlgrave/The Des Moines Register via AP.

Insurance admin - June 22, 2022 0
The combination of tropical moisture and an offshore storm will result in an uptick in...

Insurance admin - June 22, 2022 0
New You can now listen to Insurance Journal articles!The US Food and Drug Administration is...

Juul Soon to Be Ordered Off the Market by FDA, WSJ...