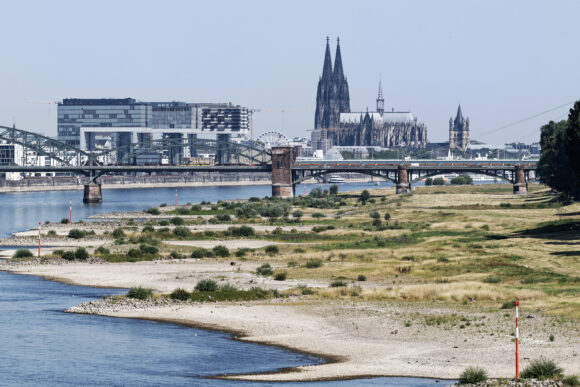 Shallow water is causing problems for shipping on the entire river in Germany. The Rhine is one of the key channels linking Germany’s industrial heartlands with the North Sea ports from which products are exported to world markets.

Freight shipping on the river continues, but with vessels sometimes forced to sail three-quarters empty. Hot and dry weather is forecast this week and no relief is in sight.

Chemicals group BASF said on Friday it could not rule out production cuts if low water disrupts logistics.

Spot prices for a liquid tanker barge from Rotterdam to Karlsruhe south of the German chokepoint of Kaub were unchanged at about 94 euros a tonne, but up from only around 20 euros a tonne in June before water levels fell, vessel brokers said.

Navigation authorities do not close the river at times of low water, leaving it to vessel operators to decide when to stop. The Rhine is an important shipping route for commodities including grains, chemicals, minerals, coal and oil products including heating oil.

German companies faced supply bottlenecks and production problems in 2018 after a drought and heatwave led to unusually low water levels on the Rhine.

Photograph: Low water level on the Rhine River in Cologne, Germany on July 19, 2022.