The cost of insuring Russia’s government debt surged to signal a record 99% chance of default within the year after its Finance Ministry paid some of its dollar bonds with rubles.

Credit-default swaps insuring $10 million of the country’s notes for one year were quoted at about $7.3 million upfront and $100,000 annually on Wednesday, according to ICE Data Services’ prices on Bloomberg. That’s up from about $5 million in advance last week, the data show. ICE is the main clearing house for European CDS. 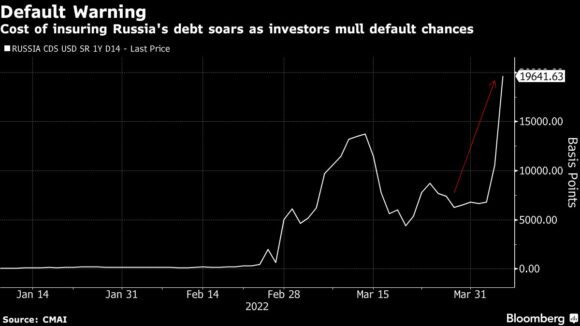 The Ministry said it had to send ruble payments to the National Settlement Depository after foreign banks rejected its payments for bonds maturing Monday and a coupon for notes due in April 2042, also scheduled for the beginning of the week. Neither security allowed a ruble payment option, according to bond documents, raising investor concern that the country is at risk of a default.

Both notes have a 30-day grace period, data compiled by Bloomberg show.

As a default by Russia becomes increasingly probable, traders have been scrambling to read the small print on contracts covering about $40 billion of debt. They’re seeking to understand whether credit-default swaps could be paid out after various settlement and clearing issues, as well as earlier expectations that the government and Russian companies could repay foreign debt in its local currency.

In March, a panel of banks and investors ruled that roughly $13 billion of Russia’s government debt could be ineligible to settle credit-default swaps because of a feature in the six bonds allowing the government to make payments in rubles, rather than the dollars or euros they were issued in.

Photograph: The Spasskaya tower of the Kremlin in Moscow. Photo credit: Andrey Rudakov/Bloomberg.

Insurance admin - June 23, 2022 0
New You can now listen to Insurance Journal articles!This content was recently published in the...