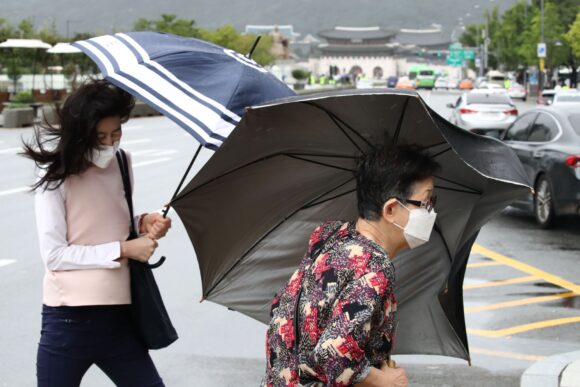 South Korea is bracing for the strongest storm in the nation’s history with Super Typhoon Hinnamnor forecast to hammer its southern coastal areas next week.

The worst of the typhoon is forecast Monday or Tuesday when the weather system is expected to pound the resort island of Jeju and batter southern coastal cities including Busan and Ulsan, with landfall expected on Tuesday.

“We’ve never encountered a typhoon with this level of atmospheric pressure before, which is extremely worrisome because the degree of damage may be beyond our expectation,” Woo Jin Kyu, a weather analyst from the Korea Meteorological Administration, said during a briefing Friday.

Extremely intense wind and rain could cause a typhoon surge and flooding, and the nation should be prepared to prevent any catastrophic damage, Woo said.

Hinnamnor is forecast to be even more destructive than Typhoon Sarah in 1959, according to the meteorological administration. That storm killed more than 600 people and injured 2,533, and caused 249 billion won ($180 million) in property damage, according to the National Archives of Korea.

The super typhoon was heading north-northwest at about 2 kilometers (1.24 miles) per hour, some 500 kilometers east off the coast of Taiwan as of 9 a.m Seoul time. The storm has slowed in recent days and is currently packing sustained winds of about 109 miles (175 kilometers) per hour with gusts around 132 mph, according to the US Joint Typhoon Warning Center.

State-owned utility Korea Electric Power Corp. said it has issued a warning as the typhoon may disrupt the nation’s power transmission facilities and equipment, while staff at Korea Southern Power Co. are being placed on an emergency roster.

Korea Hydro & Nuclear Power Co. is also taking safety measures to minimize the impact on nuclear reactors that are densely located in the southeastern part of the country.

South Gyeongsang province, near Busan, said all of its schools will switch to virtual classes on Tuesday. China’s coastal provinces have also taken steps, with preparations to halt schools, factories, businesses and transportation as needed.

Ships in the regions are currently adjusting to the typhoon’s movements, with many vessels taking detours. So far that’s not causing delays, though ships are increasing the volume of fuel being consumed, according to shipowners.

Japanese airline ANA Holdings Inc. a total of 42 flights to and from the Okinawa region have been canceled between Friday and Sunday due to the typhoon.

–With assistance from Ann Koh and Kevin Varley.