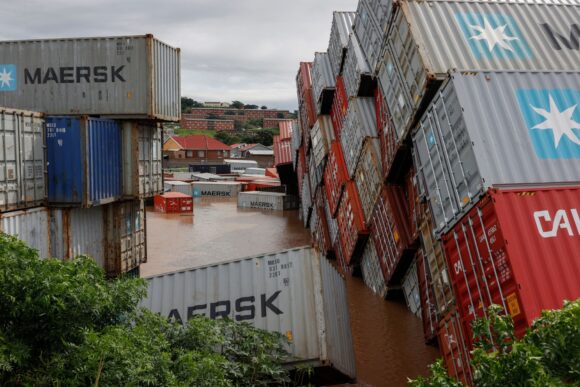 Transnet SOC Ltd., the state-owned port and rail operator, is gradually resuming operations at the Port of Durban that was shuttered on April 11, Public Enterprises Minister Pravin Gordhan said in a statement. Shipping remains suspended while the authorities determine whether its safe for vessels to dock, he said.

At least 259 people have died because of the floods, according to the government. The deluge came after weather stations in the eastern region reported the heaviest rainfall in at least six decades, with some recording more than 300 millimeters (12 inches) within 24 hours — an amount normally associated with intense hurricanes.

A.P. Moller-Maersk A/S, the world’s biggest container line, closed its Durban offices and asked employees to work from home for the rest of the week. Mobile-phone operators MTN Group Ltd. and Vodacom Group Ltd., paper company Sappi Ltd. and other firms have been affected by the floods. Insurers Old Mutual Ltd. and Santam Ltd. said they are assessing the extent of the destruction.

“The damages seem quite severe and we have received a significant volume of claims,” said Old Mutual Insure Chief Actuary Ronald Richman. “We expect a significant number of new claims will be reported in the coming days, and we have mobilized our teams to deal with the expected volumes to ensure continuity of customer service in these difficult times.”

Many of Vodacom’s mobile-phone towers remain inaccessible because the roads had been eroded and there was a risk of electrical shocks, meaning the extent of the damage couldn’t yet be assessed, company spokesman Byron Kennedy said in a text message.

Private hospital operator Netcare Ltd. said some of its facilities were no longer accessible, resulting in staff shortages and challenges in transferring patients and supplies, although all of them remained open.

Retailer Pepkor Holdings Ltd.’s Isipingo distribution center in Durban sustained significant damage and had been temporarily closed. The company said its losses were still being quantified and it was adequately insured.

The aftermath of yesterday’s floods on the N2 highway which goes by the Port of Durban, Sub-Saharan Africa’s largest container hub. pic.twitter.com/wSahwI0Ss0
— S’thembile Cele (@thembile_cele) April 13, 2022

The country’s main freight group urged truck drivers to stay away from the harbor area, which it described as “a disaster” because of damage to access roads, container yards, vehicles depots and trucks. Queues of trucks as long as 10 kilometers (6 miles) formed along the N3 highway that connects the port to the commercial hub of Johannesburg, the Road Freight Association said in a statement.

“Logistics operations will be impacted: there will be delivery disruptions for goods being imported,” said Gavin Kelly, chief executive officer of the Road Freight Association.

A dozen crocodiles were swept away from a farm near Tongaat, north of Durban, and nine were recaptured, but three remained on the loose News24 reported.

Durban is part of the eThekwini municipality, the largest in the KwaZulu-Natal province, which is the second-biggest contributor to South Africa’s $429 billion gross domestic product. The Port of Durban is sub-Saharan Africa’s largest container hub. It handles 60% of the country’s shipments and also transports goods and commodities to and from nations in the region as far north as the Democratic Republic of Congo.

President Cyril Ramaphosa outlines his assessment of the #KZNFloods and how government will assist families affected by floods. #StaySafe pic.twitter.com/ND7y9SVIDL
— GCIS_KwaZulu-Natal (@GCIS_KZN) April 13, 2022

President Cyril Ramaphosa visited flood-stricken areas on Wednesday. The government is in the process of declaring a disaster in the province, which will enable the national government to release funds to assist with reconstruction, he said.

The floods are the most deadly since 1987 when more than 300 people were estimated to have died, but the latest toll may still rise.

The disaster unfolded less than a year after a week of rioting and looting in KwaZulu-Natal and Gauteng provinces cost the economy an estimated 50 billion rand ($3.5 billion) in damages and left more than 300 people dead.

More rain is forecast for the KwaZulu-Natal province this weekend, with the risk of localized flooding and strong, damaging winds, according to the South African Weather Service. A low-pressure weather system that caused the devastation in the province is expected to move away from the country, it said.

Photograph: A general view of containers that fell over at a container storage facility following heavy rains and winds in Durban, on April 12, 2022. Photo credit: Phill Magakoe/AFP/Getty Images

EU Balks at U.S. Plan to Use Insurance to Cap Russian...