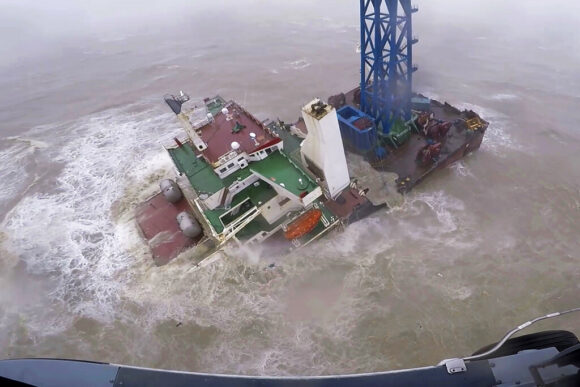 Maritime authorities of the southern province of Guangdong were stepping up efforts to identify the bodies, suspected to have drowned, after they were retrieved about 50 nautical miles from where the stricken ship sank, it added.

Four of its crew were rescued by Monday, although rescue officials in the global financial hub had warned the previous day that “very slim” chances remained of finding others alive.

The sunken vessel, “Fujing 001”, with a crew of 30, was at an anti-typhoon anchorage in waters near Yangjiang in Guangdong when its anchor chain snapped.

China’s first typhoon of the year, Chaba skirted Hong Kong but brought heavy rain and wind to southern provinces already water-logged from weeks of torrential rain and thunderstorms over the weekend.

It weakened into a tropical depression on Monday, but was expected to shower central and southern regions with heavy rain for several days as it moved north, forecasters said.

Photograph: In this image released by Hong Kong Government Flying Service, a rescue helicopter approaches a sinking ship in the South China Sea, 300 kilometers (186 miles) south of Hong Kong on July 2, 2022, as Typhoon Chaba was moving in the area. A fourth crew member has been rescued Monday, July 4, 2022, after the typhoon sunk the engineering vessel earlier this week, according to a Chinese state broadcaster. Photo credit: Hong Kong Government Flying Service via AP.