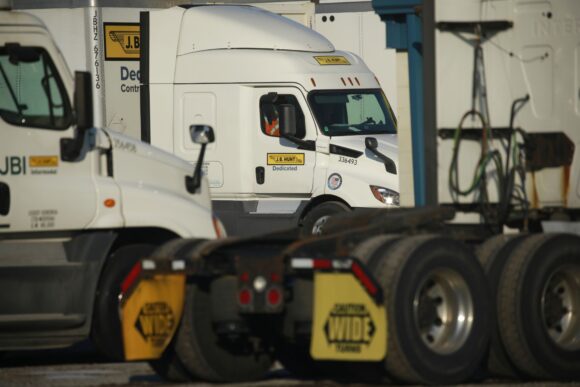 A measure of U.S. supply-chain pressures rose to a record, adding to already stiff inflationary headwinds from logistics amid dwindling warehouse space and unprecedented inventory costs.

The Logistics Managers’ Index, released Tuesday, advanced for a third straight month in March, reaching 76.2 from 75.2 in February. The monthly survey, released by Colorado State University and affiliated with four other American universities, asks logistics managers about inventories, warehousing and transportation.

Inventory levels dipped to 75.7 from February’s high of 80.2, though their costs rose to a record 91, according to the report. Warehouse capacity suffered a “a rather precipitous drop” in March, pushing prices for storage space to an all-time peak of 90.5.

The report highlighted crosscurrents buffeting the U.S. economy, where accelerating inflation threatens to hurt consumer demand. Firms that boosted stockpiles during two years of pandemic-driven supply uncertainty, meanwhile, are trying to assess whether they’ve overbought or whether the added cushion is a more permanent feature.

Inventory costs “are anticipated to remain very high throughout the next 12 months,” according to the report. Some respondents “expect to hold a lot of inventory in the next year, and to pay a significant amount to do so.”

Some survey respondents saw more inventory growth than others as goods “continue to trickle into the U.S. but are finding less consumer interest than anticipated,” the researchers said. One explanation “is that the continued fears about inflation may have led firms to build inventories as a hedge against higher future costs.”

In the survey results, transportation prices were little changed from a month earlier, utilization rose and capacity edged higher — perhaps not yet reflecting signs of weakness elsewhere in the second half of March that some analysts say portends a freight recession.

While that’s possible, “there’s also a good chance it could lead to a moderation in prices that could end up being a relief in some sectors of the economy,” Zac Rogers, an assistant professor of supply-chain management at Colorado State, said in an email.

The transport sector is “at a much stronger place in terms of supply and demand relative to the last freight recession we saw in 2019,” he said. “With capacity as short as it has been over the last 18 months, it would take a lot to get to the point where supply is really outstripping demand.”

Still, diesel fuel prices that are about 64% higher than a year ago could cloud the outlook in transportation if they stay there for an extended period, Rogers added.