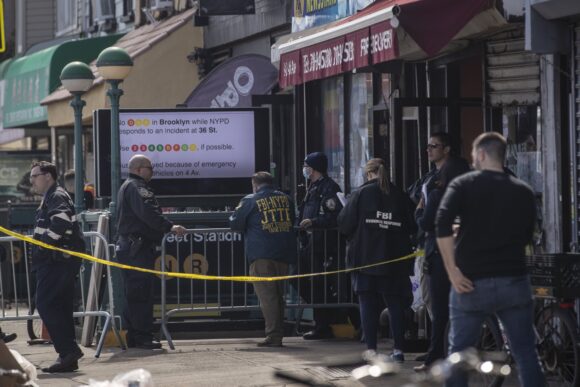 Glock Inc. and its parent company were sued by a New York City woman who was seriously injured when she was seriously wounded by a gunman who opened fire aboard a crowded morning rush-hour subway train in Brooklyn last month.

Ilene Steur, 49, was one of 10 people shot with a Glock pistol on the crowded northbound subway car on April 12 in Brooklyn’s Sunset Park section, suffered a severe wound in her buttocks, according to the lawsuit filed Tuesday in federal court. The gun maker is aware that its product design “promotes concealment” and allows a user “to inflict unparalleled civilian carnage,” the suit alleges.

Frank James, 62, is being held on federal terrorism and gun charges in the subway shooting. Prosecutors say he set off smoke cannisters and then fired a 9-millimeter Glock handgun at least 33 times inside the crowded subway car. While there were no fatalities, 10 people were shot and 13 others were injured in the ensuing panic.

The attack is one of several recent US mass shootings. Last week, a gunman killed 19 children and two teachers at a school in Uvalde, Texas. On May 14, 10 were killed at a supermarket in a predominantly Black neighborhood of Buffalo, New York. And earlier this month, one person was killed and five injured in a Laguna Woods, California, church.

Brandie Collins, a spokeswoman for Glock, didn’t immediately respond to a voice mail or email seeking comment on the lawsuit.

Steur argued in her lawsuit that the gun maker “chose to disregard the unreasonable risk of the Glock firearm in its marketing strategies.” The company also fails to terminate contracts with gun distributors who sell a high volume of guns traced to crimes, according to her complaint.

James, who has a history of 12 previous arrests, purchased his Glock 17 handgun in 2011 from a Columbus, Ohio, pawn shop, according to Steur. Glock has also manufactured the high-capacity pistol to provide enhanced “pointability” that makes it “user-friendly” and more “accurate,” Steur alleges. The gun is used by the military in the UK, Sweden, India, Israel and Yemen and police forces worldwide, she said.

While firearms manufacturers and dealers are shielded in part under the 2005 Protection of Lawful Commerce in Arms Act, which limits liability when their products are used in crimes, New York state passed a law last year designed to allow civil suits to be brought against the gun manufacturers.

Photo: Officers at the scene of a shooting at the 36th Street subway station in Brooklyn. Photographer: Victor J. Blue/Bloomberg