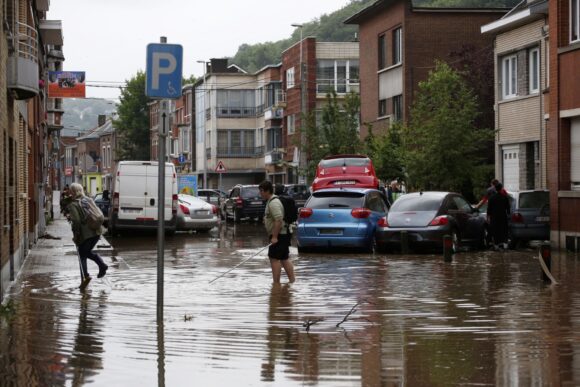 Emissions of planet-warming greenhouse gases caused by human activities are directly responsible for long-term dry conditions in the Mediterranean basin and the increasing rainfall over the rest of Europe during winter, according to a study by the UK’s Met Office.

The research, published in Journal of Climate, is the first to show the direct link between seasonal rainfall trends in Europe and climate change, the Met Office said in a statement. Scientists compared climate scenarios with and without human influence.

“With this clear identification of the role of greenhouse gasses, this study provides further evidence that changes to our rainfall patterns in Europe will continue as our atmosphere warms,” said Nikos Christidis, lead author and Met Office climate scientist. “Even though countries are used to these kind of extremes, the increase in frequency, severity and intensity is going to demand greater adaptation to a new kind of climate regime.”

Scientists are highly confident that man-made climate change has an influence on precipitation patterns on land, according to the conclusions of the latest report from the UN-backed Intergovernmental Panel on Climate Change. But the regional effects of this global trend have been more difficult to detect, making it harder to come up with mitigation strategies to help vulnerable populations and the environment.

The study looked at seasonal precipitation in Europe since the beginning of the 20th century. It found that the Mediterranean basin is getting drier, while the rest of the continent is becoming wetter. This trend is stronger in winter and weaker in summer, when drying is more widespread across the whole of Europe.

As the planet warms, water evaporates and water vapor increases by 6-7%, according to research cited in the study. The higher moisture in the air leads to changes in rainfall patterns.

The Met Office’s findings fit with attribution studies of single events like the floods that devastated Germany last year. Human emissions of greenhouse gases are making such events more intense and more frequent.

Using a new generation of climate models, scientists were able to create a scenario where human influence on the climate was removed, another where the climate was influenced only by aerosols and a third where it was influenced by aerosols and greenhouse gases. They concluded that greenhouse gas emissions were the main contributor to the trend, but that it was also weakened by aerosols, which have a cooling effect on the planet.

Ironically, as the world — and particularly Europe — seek to improve air quality in cities and restrict emissions from industrial activity, changes in rainfall will accelerate, the study concluded, because of a decrease in the amount of polluting aerosols. That, coupled with the continuing warming of the planet, means there’s an increasing risk of extremely dry seasons in the Mediterranean and extremely wet seasons elsewhere in Europe.

Even in countries with a relatively high capacity to adapt to the changing climate, communities may still be greatly vulnerable, Christidis said. “The climate will shift to something that we’re not experiencing now and these changes will all come with a raft of impacts.”

Photograph: Residents wade through flood water on a flooded street in Angleur near Liege, Belgium, on Friday, July 16, 2021. In Liege, one of Belgium’s largest cities, people were forced to evacuate homes in the city center as devastating floods also swamped parts of western Germany, Luxembourg, and the Netherlands. Photo credit: Valeria Mongelli/Bloomberg.